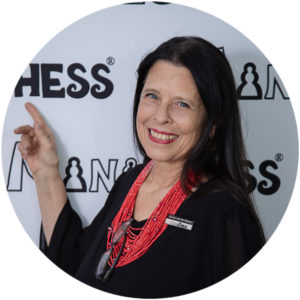 Born on 28th March 1955 into a family of teachers, the purpose and joy of empowering others have guided her journey to many countries and cultures around the globe. She believes that the most powerful energy on earth is HUMAN talent – a gift planted into every child, so that they may grow and flourish.

Marisa’s chess journey started from birth – with parents Piet and Winda Robbertse were top chess players and chess administrators at provincial and national levels for decades. Piet Robbertse were competing at SA Closed level for years, won many tournaments, started the first SA Junior National Chess Championships, brought media & Corporate sponsorships to chess, and visited international chess players to participate in SA events. He had the renowned Piet Robbertse Open Chess Tournament named after him. Winda was the SA Ladies Champ for many years.

Apart from participating in schools’ chess, junior- & provincial chess events for years, her personal chess-coaching journey started with community chess classes in the garage of her house. This later developed into training programs all over South Africa as well as international.

She has a strong belief in business development for a sustainable future, and has strived to establish fairly remunerated chess-coaching programs in SA, and wider.

Her MiniChess StartSmart program (4-10 year-olds) won the Eduweek Award in 2018 for Early Childhood Development. The program does develop chess talent from the early ages – AND it also focuses on developing “THINK”-skills using chess-based, clever play innovations. This serves children from an early age to learn the game of chess AS WELL AS 21st Century skills, NOT taught inside the school-curriculum: higher-order thinking (problem-solving, forward planning, risk-taking, strategic thinking and critical thinking), a socio-emotional toolkit (grit, resilience, and emotional intelligence), an entrepreneurial mind-set and math-based STEM-skills for future-readiness. This program has impacted 250,000+ children, has been translated into 7 languages and is registered in 5 continents.

Since the 2020 school lock-downs, she established the purpose-designed MC-Platform, launched MiniChess-Online and MindCo-Online programs with success. She implemented offline tablet-based training programs and a Portal to reach sponsored communities.

Global acknowledgement for chess-in-education: She presented the first online MindCo-Jnr program for Future Leaders this year, with Teens at Galileo – currently the leading distant-learning organization in the world, and was subsequently contracted into their Entrepreneurial-curriculum with high praise. Marisa developed the MindCo-program – using situation-simulation exercises to develop THINK-skills for Strategic Leaders in a fast-changing world.
She is invited as a member of the Panel of Specialists for Entrepreneurial training at the Global Online Learning Conference, mid-August 2021.
The MiniChess program has been included in studies at both the Universities of Pretoria and Johannesburg – delivering proven results for correcting early developmental backlogs. The program improved school readiness, mathematical- and number skills at the early ages. The MindCo-program was included in a WITS-study for the Development of Critical Thinking and Professional Development amongst medical professionals, with sustained measurable impact.

Into the Future: Excited about her passion, Marisa is focused on making power moves for chess inside a future-fit education system – empowering PEOPLE to thrive in this time of smart machines.  Garry Kasparov: “MiniChess is the most scientific program in the world, linking chess with education” -2012

Marisa acquired a B.Sc. degree from the University of Pretoria and married her high school sweetheart – today celebrating a family of 5 children and 1 grandson, making their own mark in a fast-changing world. Apart from adoring her family, she loves the ocean, African sunsets and long walks in nature.